The Future of Jobs report released by the WEF outlines the trends that will assuredly distort the global economy in the next 5 years.

The biggest takeaway from this report is that by 2022, recent technologies, automation, and the overall technological progress will have created 133 Million jobs and destroyed 75 Million. Quick maths: the needle is towards the positive side, by 58 Million to be precise.

But think about it. What’s driving this growth?

Machines giveth and machines taketh away

The machines are working harder by the day. Even the numbers agree. By comparing the hours needed for a task, we can easily juxtapose the productivity of the two.

Here’s a pie chart for that. 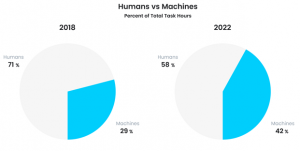 The WEF labels this era of change as the Fourth Industrial Revolution. They claim that it’ll be one of massive job automation but even greater job augmentation. According to them, with some worker retaining, the future should be sorted.

But here’s what this rosy report misses.

The business surveyed by the WEF for the purpose of this report state varying rates of technology adoption. 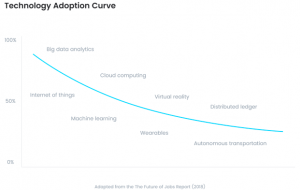 The vertical axis in the chart – adoption – is only one half of the innovation equation. The horizontal axis, that represents new technology development is relentlessly progressing in parallel. The more we automate, the faster the jobs of the future will be automated.

For instance, consider Uber. The automated ride-sharing app has given jobs to millions of people. But wait. If Google and Uber pursue autonomous vehicle technology, these newly created jobs will top the list of jobs to be chopped.

Let’s talk about newer jobs – like in data science. Will the future automate repetitive tasks such as data visualization and data wrangling?

Digitally-enabled jobs are particularly at risk here, because they create a data footprint that can be run through AI and ML for automation or optimization.

Even if all of this simply augments the productivity of workers instead of entirely eliminating the jobs, there’s one unavoidable fact – it is going to take fewer and fewer people to manage the entire work. This points towards a reduction in the number of employees required over time for any specific function.

Are the 133 million jobs created just to disappear soon?

One thing that shouldn’t come as a surprise is that even with the rate at which technology adoption is happening, the demands for software developers remain strong. Developers will clearly play an extremely important role for decades to come. Even then, according to a report by Stripe, companies view developers as a constraint than capital when it comes to innovation.

While technology may create new jobs, these jobs won’t be for everyone to perform. These will be very specific, technology-enabled jobs, and it won’t make sense for companies to reskill their entire pool of people when the time comes.

For you, now’s the right time to learn and relearn, reskill and reinvent. Or else you’ll seriously be left behind.

What’s worse is that reskilling bottleneck and automation share a directly proportional relationship. The greater the bottleneck, the higher is the incentive to automate the jobs or to reduce the number of jobs created by augmenting workers.

There’s no second-guessing that the WEF report is highly optimistic about the future.

Marc Andreessen concurs, saying, “It’s a fallacy….It’s a recurring panic. This happens every 25 or 50 years, people get all amped up about ‘machines are going to take all the jobs’ and it never happens.”

But such a pollyannaish view, if incorrect, can prove to be fatal.

Software is already the backbone of nearly every company, allowing automation an unprecedented reach. In addition to that, as devices, platforms, and services proliferate, workers across all industries can become highly productive, thereby reducing the total number of available jobs.

The conclusion to all this? Job loss can be far more rapid than job creation.

The need of the hour? To be aware and up-to-date. To not have rosy shades on while visualizing the future of work. Because the thing about rosy glasses is that when you have them on, all the red flags look just..flags.

We can all sit and hope that WEF is right, but if they aren’t, we’d have lost all the time we had. Or, we can be smart and start our reinvention by planning for the creation of real, sustainable jobs in the face of constant technological advancement and automation.

In closing, here is an important piece of lyrics for you to keep in mind, at all times:

“You are young and life is long and there is time to kill today.

And then one day you find ten years have got behind you.

No one told you when to run, you missed the starting gun. 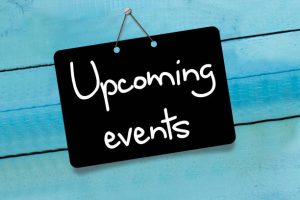